Varsity Hawks are undefeated and show no signs of slowing down 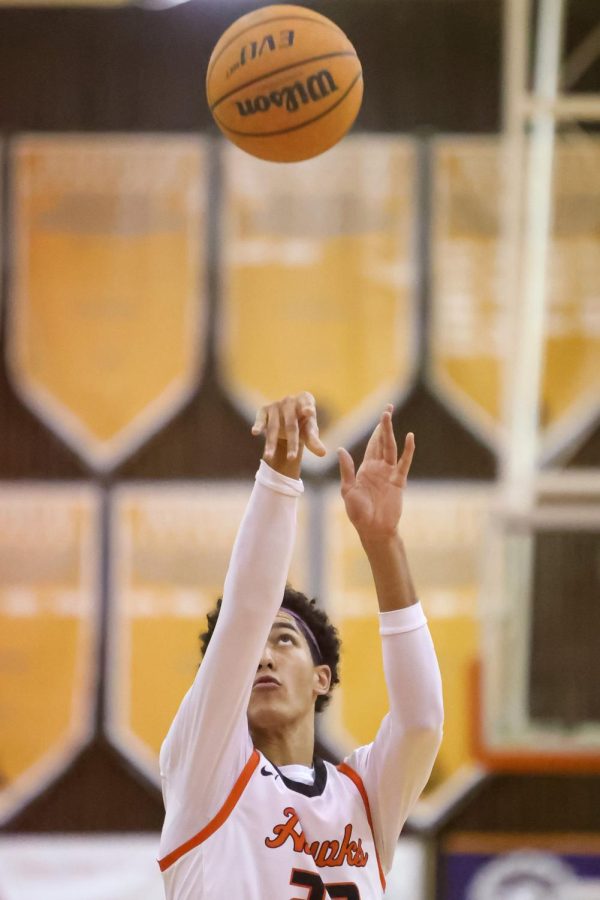 “Best in the district”, “Best in the state”, “Going all the way”. Comments that have been made about this team all year. But how good are they really? Currently they are 13-0, averaging 80 points a game, and have beaten South County High and Independence High who are top ten talents in class six. The expectations for this team coming into the season were very high and so far the team has lived up to those expectations.

In the short season so far the defensive effort by the team has been extremely impressive. D.J. Holloway Jr. has been aggressive in passing lanes and is averaging three steals per game. The team’s leading stealer, Braylon Wheeler, is averaging four steals per game as he has been a consistent defender these past couple seasons. His ability to finish at the rim under pressure has also been impressive in this short season.

Rebounding is also another area the team has excelled at surprisingly. Greg Jones and David King lead the team in rebounds with six a game. The starting five’s average height is 6’1.5 which is very average for a high school team, but this team gets a lot of rebounds that they shouldn’t because of their physicality and boxing out ability.

“I’m the tallest guy on the team,” Junior starting wing Greg Jones said. “It’s all about effort when it comes to rebounds.”

Our starting 5 might be the best in the state behind Oak Hill Academy who is ranked in the top 25 nationally. All five starters are averaging double digit points with Greg Jones and David King both scoring 16 points per game. The starting five contribute to about 66 points a game. Only one out the seven games played has a team scored more than 66 points (same as our starters ppg). That game was against South County, where our team did not play up to par but still managed to win the game.

“We’ve been playing together for two years,” Jones said.  “Having that chemistry really helps because we all understand what we bring to the team.”

Markus Rouse, the sixth man off the bench is averaging seven points per game. The starting five plus Rouse combine for 73 points a game. That is 91% of our total points a game.

“[Rouse] is basically a starter for us. He plays great defense, and he can knock down shots,” Varsity Boys Basketball Coach Poindexter said.

There is no urgency for the bench to be playmakers and score so far in the season as all top six scorers have been consistent and healthy. But with Covid’s ever looming presence, depth will be something that needs to be addressed.

For every team, depth is always something the coaching staff has to access at the start of a season. The bench players for Hayfield have gotten more minutes than other benches in our district due to the poor competition at the start of the season. That being said, Hayfield was up 15 in the fourth quarter against Annandale and the deep bench didn’t go into the game until the last minute. Even though Coach Poindexter is hesitant with his bench he did have confidence in their ability to get more playing time this week and upcoming weeks. Coach did say that sophomores Ryan Payne and Sean Burton would be getting playing time in the coming weeks and on Thursday, January 27th against Justice they both started. Coach also praised the shooting ability of Juniors Braelen Cage and Colin Souther and Seniors Sky Thompson and Nate Tesfaye.

“[they] can shoot the ball and will get spot minutes,” Said Poindexter.

With district play underway, the bench has already been getting more minutes and will continue to get better as the season continues. This team can win our district, region, and maybe even states.

Currently we are ranked number 1 in class 6 by MaxPreps and Virginia Preps. *All information as of January 27th