Computers in classrooms cause little to no student interaction 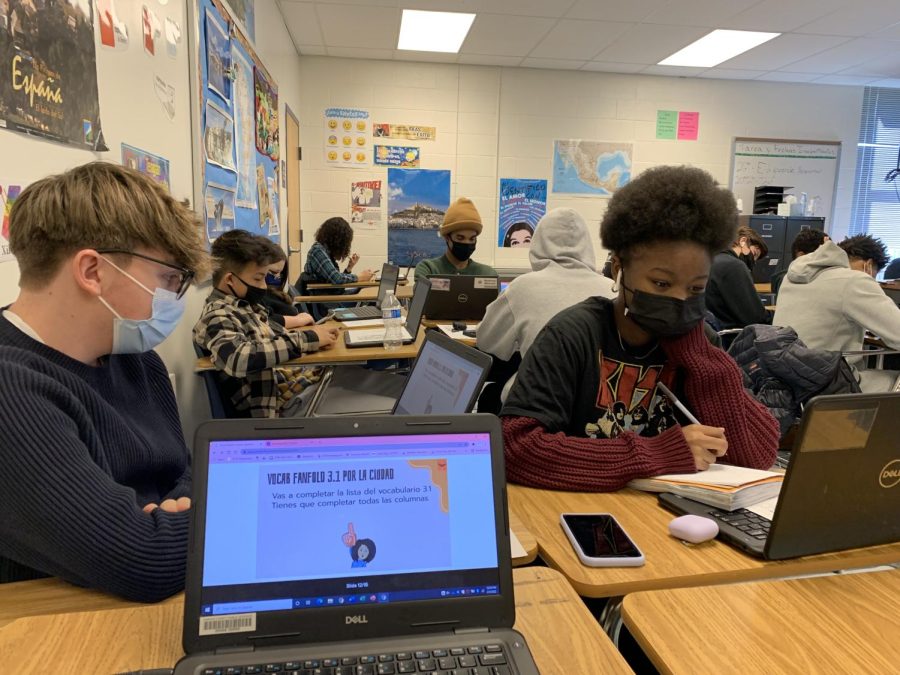 The majority of high school students fail to realize that they are addicted to technology. This addiction eventually affects the way students are able to interact with each other. I don’t fully blame students though, it’s not our fault that we have been placed in an era of advanced technology. Last school year, all Fairfax County Public School (FCPS) students were behind screens having to learn, but this year FCPS decided to bring back in person school. Physically, us students are in school, but mentally our minds are elsewhere. We’re trying to find clubs to join that will look good on college résumés, manage being in sports teams and applying for jobs, all while still trying to get good grades.

Not to mention, there was no prep for us students in transitioning back to in person after going through distance learning. We had to force ourselves to adapt to being in a classroom with 20 other students again. You would think that since we were back in person for school, students would be freely engaging with each other, but it’s almost the total opposite in a lot of classes. With the majority of the work assigned to students being on our laptops, students are glued to their computer screen almost all of the school day. It’s like virtual learning all over again, but the only difference is that we have been physically moved into an actual classroom.

At times it’s even hard to realize that you’re in a classroom setting when you feel disconnected to the people around you. Computers and the overuse of technology in general cause this disconnection. Our computers have become symbols of barricades. A year ago some students had never had a face to face conversation with anyone but their family members, and when it came to speaking to their classmates, the chat section of Blackboard Collaborate was all we knew and what we were comfortable with. Even to this day when we have the chance to be in person for school,  it’s also as if students feel safer behind screens then exposing themselves to interact with their classmates.

For instance, in some classes teachers will provide breaks for students. Students can use that break as a screen break by being off of their technology devices or to talk to the people around them, but students won’t take the advantage of the break. By choice, the majority of students will scroll and stare at their phones, overlooking the meaning of a screen break.

If we had more paper/pencil work, students would more likely ask the people around them for help. In contrast to when all the work is assigned on laptops, students don’t have the full courage to ask for help but rather go to google. That’s also the thing with technology, everything is easily capable of being accessed. This also makes me understand from a teacher’s point of view that it’s easier to assign and share work through schoology rather than giving out paper/pencil work. It’s also easier for teachers to keep track of student assignments and grades on laptops, and as for students we don’t have to worry about losing papers. However, if this will be the case as to where paper/pencil work becomes something of letting go of, then I encourage teachers when possible to incorporate more group work for students.