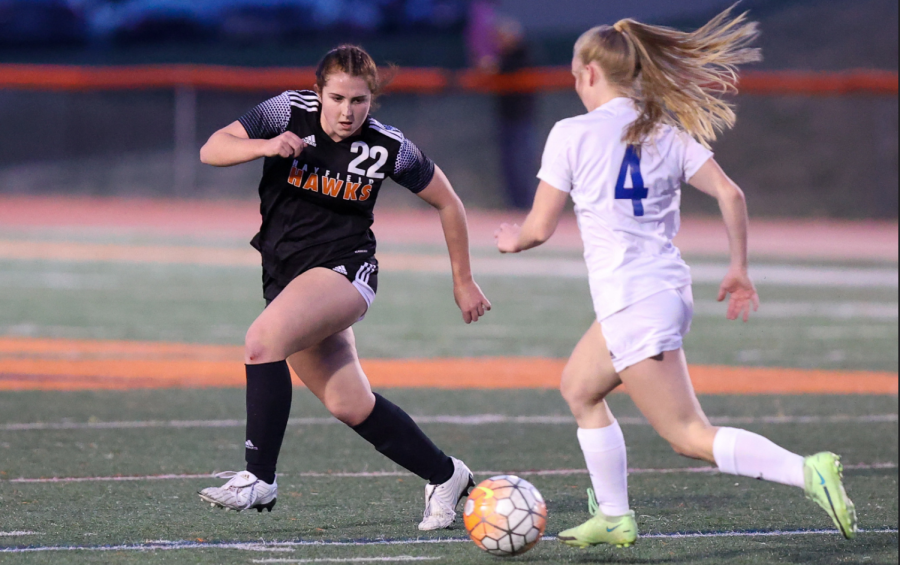 It’s that time of the year again. Flowers are blooming, birds are chirping, and Hayfield’s spring sports teams take to their respective fields and courts in another valiant attempt to win it all for the name of their school.

This summary article will tell you everything you need to know about Hayfield’s eight ongoing seasons, the expectations that teams set for themselves, and the top player to keep an eye on throughout the spring.

Girls Soccer
Summary: Starting out our list is the girls soccer team. The group has been hungry for wins for a while now, and it seems this may be the year that things flip for them, with a strong forward core of hard hitting strikers that has made significant strides since the 2021 season. Throw in a fun new assistant coach that pushes players towards physically and mentally bettering their play, and you have yourself a promising girls soccer squad.

Player to Watch: The team is led by senior captain Mia Cestare, who has held captaincy since her junior year, along with possessing a varsity spot since she entered as a freshman. And it’s not for no reason. Cestare is an incredible leader always looking to help younger players progress, and has a very technical soccer IQ that she utilizes to throw players off of their game and put the ball in the back of the net.
Boys Soccer
Summary: The boys soccer team completed their last season with a positive winning record, and many feel that they have the talent to continue their success and even find more this year, with a good chance of taking regionals and districts. The team features college commits Jack Oullette and Mario Alvarez, along with future college-playing front runners, juniors Matthew Caldwell and Hatim Elkhasouani.

Player to Watch: Senior Jack Oullette is an aggressive, high pressing, and swift attacking midfielder/striker who has recently committed to Merchant Marine Academy to continue play, meaning his final high school campaign is appearing to be an explosive one filled with exciting offensive plays.
Girls Lacrosse
Summary: The girls lacrosse team finished last year’s regular season at a 2-6 record, and it is already looking as though they can begin to turn that around, with strong performances throughout the beginning of the season and an all-around shared ambition to improve both team chemistry and group communication compared to that of prior years.

Player to Watch: Second year captain Caroline Carter finished last year averaging 2.5 goals per game, with 8 in 20, along with receiving the honor of second team all district. Carter has played on Hayfield’s varsity squad since freshman year, and looks to continue success in her third year in action.
Boys Lacrosse
Summary: The boys lacrosse team has a lot of high caliber talent in their forwards this year, and it is believed that they can score at a consistent and fast-paced rate, of course resulting in a hopeful district championship and nearly undefeated record throughout interdistrict play.

Player to Watch: There is no shortage of accolades for sophomore Joseph Weinburgh. A varsity player in his freshman year at Hayfield, Weignburgh received last years’ team MVP award, made first team all district, and was an honorable mention for first team all region. Weinburgh netted 17 goals in 11 games, establishing himself as one of Hayfield’s most elite scorers.
Softball
Summary: Things were expected to be a bit shaky with the implementation of a new softball coach, but the relationship is thriving, and so is the team. They have been all offense so far, with big wins, consistently tallying over ten runs day after day. It appears these new relationships may repair some despair from last season’s unnecessary pressure, which inevitably forced the team out of the playoffs earlier than expected.

Player to Watch: Junior Jazmynn Adams stands at the peak of Hayfield softball pitching, and she utilized the offseason thoroughly developing with the motion, control, and speed of her delivery. She has eclipsed the outfield wall onc already this season, an impressive feat for a player focusing on an aspect of the game separate from hitting, and lots of growth appears imminent.
Baseball
Summary: The baseball team is already on track to best last year’s 5-9 record. They boast a strong winning record with several big and important wins, including an incredible 25-0 score against Park View (in a single inning at that) and a tight 2-1 victory over fierce competitor Robinson. If they can manage to beat Lake Braddock and Madison later this season, they can likely win the district and region.

Player to Watch: Outfielding junior Nicholas Griffin is the player among the team who has seen the most growth both physically and mentally since last season, and he is an overall solid player throughout the entirety of the game of baseball, with no shortage of home runs thus far.
Tennis
Summary: The boys didn’t reach their full potential last year, but recently routed Annandale and are looking forward to a powerful season against a multitude of strong opponents. The girls have put stellar singles play on display, and are steadily improving in the doubles category, with consistent wins and the possibility for districts and even regionals.

Player to Watch: Senior Lauren Cousens is a powerful and hard-hitting lefty who knows how to set the ball up perfectly and will have players running sprints from one side of the court to the other with her elite placement. She should be a promising player to keep an eye on due to such an exciting back-and-forth playstyle.
Track and Field
Summary: The track and field team is mainly aiming to work to do better as a team this season, as their girls have succeeded plentifully throughout fall and winter track, with the boys slightly behind. However, exciting runs from athletes such as Sarah Cestare, and Xavier Carmichael this winter prove that this is no barrier to the team, and Hayfield track and field is poised to take some top spots on the podiums in May and June

Player to Watch: George Brennan takes the cake here as a freshman who runs a 4:40 mile, an incredible achievement that most runners don’t reach until their junior or even senior year of high school. His accomplishment immediately placed him #1 overall among United States freshmen, and as of now he remains within the top 50 in the nation and is steadily improving his craft.