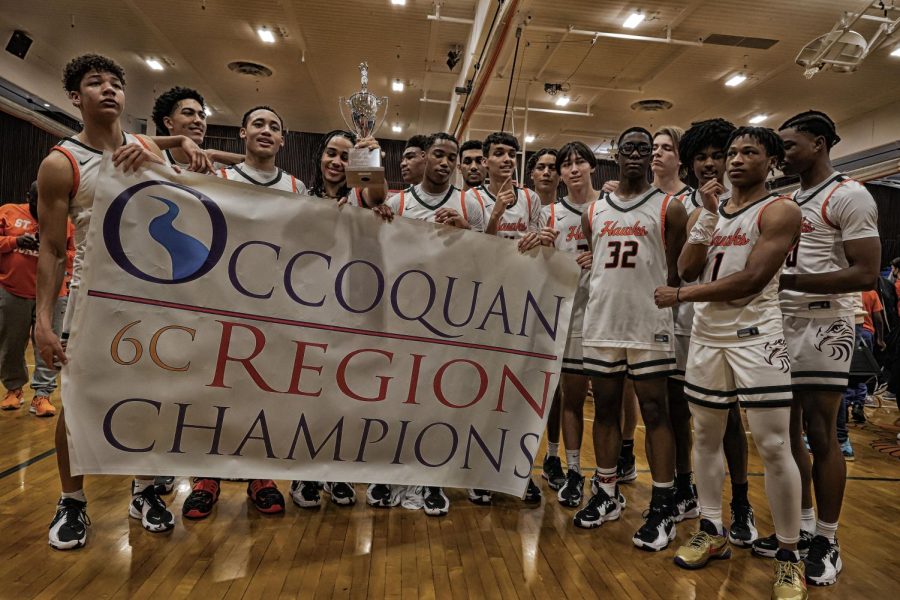 Coming off their 87-60 win over Edison, the Hayfield Boy’s Varsity Basketball Team sealed the National District Championship. The undefeated Hayfield Hawks come soaring into the Regional Championship against the 17-6 Fairfax Lions.

After a slow start in the first half for the Hawks, they regained control of the game in the second half holding the Lions to only three points in the third quarter. Senior point guard Braylon Wheeler believes that Hayfield’s intense defense is one of its biggest strengths .

“None of us are mismatches for anybody on defense… if we can get stops on defense we can pretty much do anything we want,” Wheeler said.

Senior guard Ashton Pratt admits that the team’s defense is one of its strengths that separates it from the rest of the other teams in the region.

“With four guards and (senior) Markus Rouse coming off the bench our defense gets hectic and most teams can’t handle that amount of pressure,” Pratt said. “[We call this style of play] stops and buckets…we know if we get a stop on defense [then] the offense will come easily.”

Which is exactly what Hayfield did outscoring Fairfax 50-21 in the second half. Senior Markus Rouse, who plays shooting guard or small forward, says this is because of the team’s chemistry.

“We’ve all been around each other for about three years now, so the whole starting six [are] best friends,” Rouse said. “This helps the team recognize each other’s strengths and weaknesses, and overall stick together and play together.”

With a final score of 82-45, the Hayfield Hawks became the regional champions. All the players shared their feelings of happiness.

“I believe we over-exceeded expectations. We thought of the game as just another regular game and played our hardest,” Wheeler said.

The Hawks are motivated heading into the state tournament as one of the favorites to win the state title.

“[ We are] amped and ready to win the state championship, and I believe that we’re going to play the same way we did in the regional tournament, if not better,” Rouse said.

The Hayfield boys varsity basketball team has not had a run like this in a long time. Junior Greg Jones is hopeful to make a similar run next season alongside his fellow juniors David King and Daryl Holloway, and knows that repeating this special season will require special effort.

“If David, Daryl, and I step up as leaders… and the underclassmen show up during the offseason and take it seriously. Then I think we can have the same type of season next year as we did this year,” Jones said.